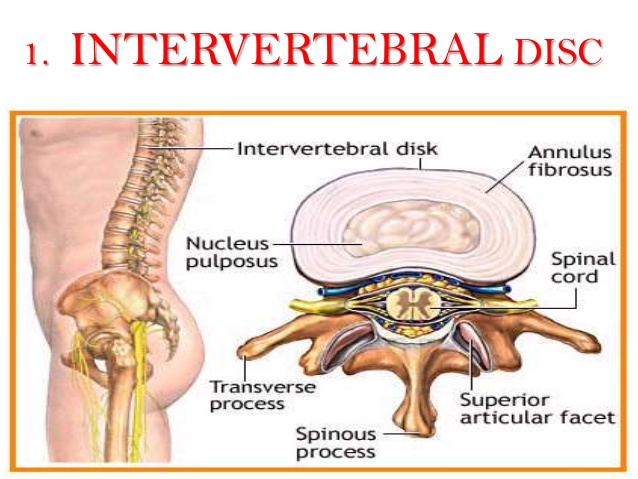 A herniated disc is a painful but common occurrence especially among aging Americans. Many of us are familiar with recurring backaches, but when the pain starts radiating through the lower back to the foot, it might be a sign of disc herniation.

Your spine is made of up 26 bones or vertebrae. Between each bone is a intervertebral disc that is shaped like a jelly donut, with an elastic outer ring made of cartilage and a soft-jelly like-center. These discs act as a cushion between each vertebra and prevent them from grating against each other during movements. The disc can degenerate due to age or injury, and when the central, soft, portion gets ruptured, it is called a herniated disc or “slipped disc”.

The disc most prone to herniation is between the fourth and fifth vertebrae because its located at the lower back and bears the most weight of your body while standing or sitting.

Signs and Diagnosis of a Herniated Disc

Pain is the most common symptom of a herniated disc, and it usually travels downwards from back to the buttocks to the thighs and calves. That said, not every with a slipped disc will experience the symptoms.

Activities like sneezing or coughing make the symptoms worse because it adds higher pressure to the affected area, aggravating the pinched nerves.

Some other signs of a disc herniation include weakness, affected mobility, numbness or tingling sensation, pain in arms and legs.

If you suspect a herniated disc, you should visit your Doctor. A simple physical exam is usually enough to confirm a diagnosis, but in some cases, the following diagnostics may be used:

CT Scan- A CAT scan takes images of your spinal column and the parts around it from various angles and combines them to create a broader perspective for your Doctor.
X-Rays- Won’t show the slipped disc, but a standard X-ray will show the outline of your spine, or show the degeneration of the spine, and your doctor will be able to rule out fracture or tumor as a cause of your back pain.
Myelogram- A contrast dye gets injected into the spinal fluid. Then X-rays are taken to glean the pressure on your spinal cord.
MRI-Using radio waves and magnetic fields, 3-D images of spinal cords are generated that allows the doctor to identify the herniated disc and look inside it to determine if any nerves were affected.

With some people, the symptoms go away on its own within six weeks. The following herniated disc treatment venice fl procedures also help speed up recovery:

• Get some rest- Avoid activities such as bending, or lifting or exercise that engage your back. Use an ice or heat pack on the affected area to alleviate swelling and pain.
• Medication- Your doctor may advise you to take Over-the-counter pain medications such as ibuprofen or Naproxen. For aggravating pain, your doctor may prescribe drugs such as codeine or Percocet. Anticonvulsants may be prescribed to help pain radiating from a pinched nerve. If you have muscle spasms, a muscle relaxer may be prescribed. To alleviate swelling, the doctor may give you a cortisone injection at the area around spinal nerves.
• Stretching exercises- Yoga or just simple stretching have been shown to be beneficial to alleviate the symptoms of a herniated disc.

A herniated disc surgery is usually kept as the last option if no other treatment works. Sometimes the part that’s herniated will be removed, or the entire disc may be taken out and replaced by an artificial disc, or a spinal fusion surgery will be performed to bridge the gap between the vertebra.